Letter from a student 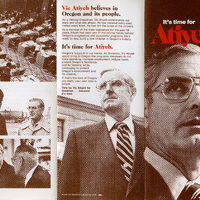 With Dolores at an event

In 1974, Atiyeh made his first run for governor. He successfully defeated State Treasurer Clay Meyers in the Republican primary, despite the fact that early polling had shown Atiyeh lagging behind Myers in name recognition. He lost to Democrat Robert (Bob) Straub in the general election -- the only electoral loss of Atiyeh's political career, and one he reversed when he defeated Straub in 1978. In Atiyeh's 1982 re-election, he won by the largest margin in over 30 years of Oregon gubernatorial politics.

Over the course of three gubernatorial campaigns, Atiyeh traversed the state by plane and by car, visiting dozens of county fairs, club meetings, and pancake breakfasts, meeting Oregonians, hearing their problems, and earning their votes.