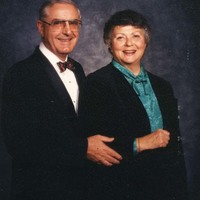 With a Campfire Girl 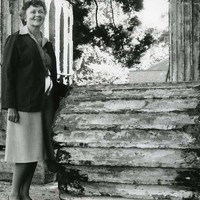 Victor Atiyeh first met Dolores Hewitt in high school. "I really wasn't really interested in girls," Atiyeh said, "until I saw her. Then my eyes started spinning" (Oral history. Dec. 1, 1992. Tape 3, Side 1, p 55). Like Victor, Dolores attended the University of Oregon, where she was a member of the Alpha Chi Omega sorority. After dating for several years, the two were married July 5, 1944, while Atiyeh's brothers were home on leave from the war. They were married for almost 70 years until Victor's death, and had two children together, Tom and Suzanne.

Supportive of her husband's campaigning and a dedicated hostess as First Lady (at a time when the First Lady was expected to use her own china and flatware when entertaining state guests), Dolores Atiyeh was popular with the people of Oregon in her own right. Her civic contributions included serving as a Rose Festival Court chaperone, as a charter member of the Broadmoor Women's Club, as honorary chairwoman of Oregon Citizens for Immunization Inc., and as honorary chairwoman of the 1981 Governor's Conference on Historic Preservation.