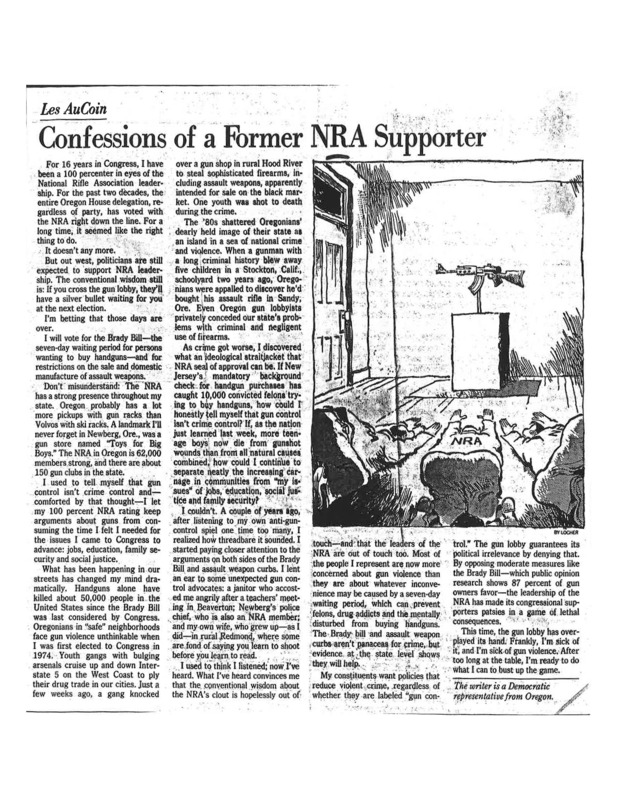 "Confessions of a Former NRA Supporter"


For AuCoin’s first 15 years in Congress, he was generally opposed to gun control legislation, along with the rest of the Oregon delegation. At the time, gun control did not have broad support in Oregon, and the NRA held considerable influence in Congress. However, AuCoin publicly changed his position in 1991 by supporting the Brady Handgun Violence Prevention Act, also called the Brady Bill, which called for a seven-day waiting period and background check on firearm purchases. The act was generally supported by US voters but faced fierce opposition from the NRA. A version of the law was first proposed in 1987, but it repeatedly failed to pass.

When the Brady Bill was proposed again in 1991, AuCoin decided to support it. He declared his support in an op-ed in the Washington Post, hoping that by supporting the bill so publicly, he could “kick up a gale that would give cover to House colleagues the gun lobby hoped to intimidate”1. The op-ed and AuCoin’s subsequent appearance on the television talk show Crossfire kicked off a wave of support for the Brady Bill, which even earned an endorsement from President Reagan.

The Brady Bill passed the House in May 1991, but it faced a filibuster in the Senate and failed to become law. However, it was one of the first gun control measures to earn such broad support, and a new version of the bill eventually passed in 1993.