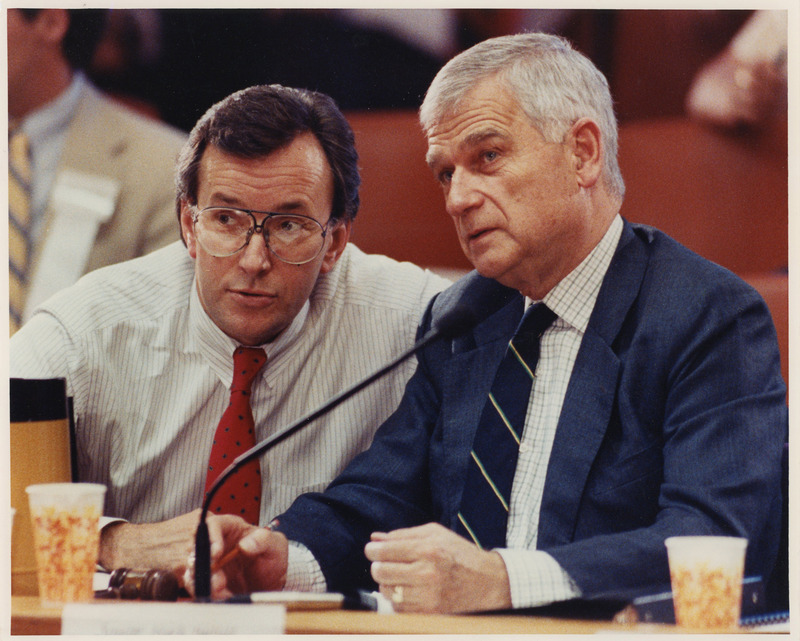 AuCoin and Hatfield at the Timber Summit


While Oregon is among the top five states in terms of number of protected wilderness areas, it also has a massive timber industry. AuCoin frequently had to balance environmental concerns with the possible impact on the local lumber mills. This tension was most evident in the spotted owl controversy in the 1990s. In 1989, environmentalists challenged the Forest Service’s operating plan in the Northwest, arguing in court that the environmental impact statement did not account for the northern spotted owl. By not considering the impact on the owl, which was considered a threatened species, the Forest Service was in violation of the National Environmental Policy Act. Federal judge William Lee Dwyer ruled in favor of the environmentalists, and he halted all logging in federal forests in the Pacific Northwest until the Forest Service created a new plan and environmental impact statement.

The ruling created enormous resentments between the timber industry and conservationists, with the spotted owl as the symbol of the fight. In an attempt to negotiate a solution between the two sides, AuCoin called for a summit with the entire Oregon congressional delegation, the governor, and representatives from the environmentalist and timber industry groups. Despite the negotiations, the Forest Service ultimately failed to create a new plan, forcing the Oregon delegation to legislate a solution through the annual appropriations bill for the Forest Service. The amendment offered environmental protection for old growth forests and the northern spotted owl while still allowing timber harvest. However, the solution was a temporary one, and the Forest Service was still required to present a new plan the following year.

The spotted owl controversy was also a major issue in the 1992 election, and both Representative AuCoin and Senator Packwood highlighted their stances in their competing campaigns for the Senate. In his memoir, AuCoin recalls working on the issue during the campaign:

Hatfield and I had been laboring virtually nonstop with others in the Northwest delegation to protect the endangered owl, an indicator species of forest health, while saving timber jobs…. Then, with little advance notice, [Packwood] called for the repeal of the Endangered Species Act. Most rural Oregonians loved the move. Packwood did not tell them his idea had no chance of surviving congressional debate, much less a Senate filibuster. Nor did he disclose that the court injunctions banning logging in Northwest federal forests were based not on the Endangered Species Act, but a Forest Service violation of the National Forest Management and National Environmental Policy Acts. Thus, even if the senator’s idea had passed, it would not have made a scintilla of difference for timber workers.1

Ultimately, the spotted owl controversy continued after AuCoin left Congress in 1992. President Bill Clinton, who promised to address the issue during his campaign, proposed a new Northwest Forest Plan in 1994. The plan allowed logging in 20% of the Pacific Northwest’s federal forests, reserving the other 80% as protected land. As a result, the federal court finally lifted the logging ban, ruling that the new plan adequately addressed the protection of the spotted owl.