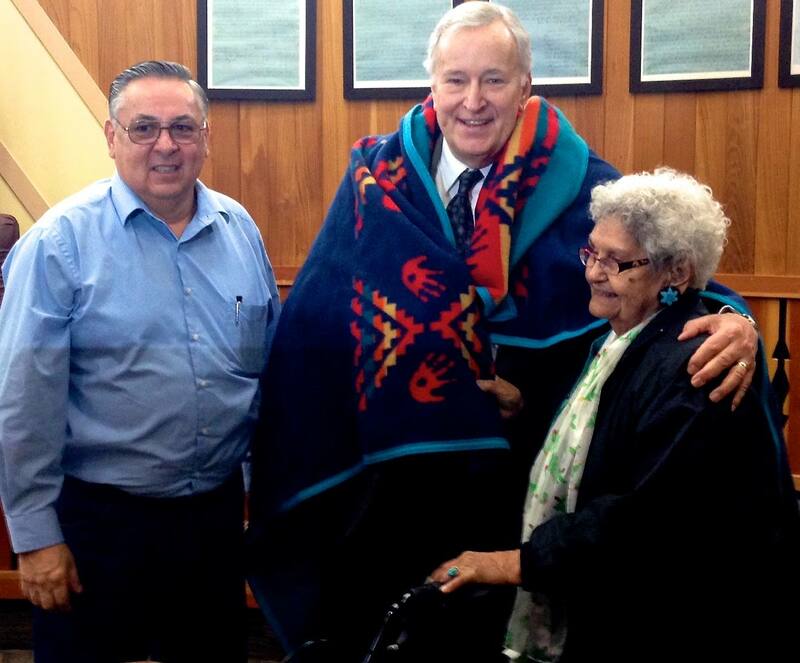 
The 1970s saw a wave of Native activism in the US, building on the momentum of the civil rights movement in the 1960s. In Oregon, twenty years after the Western Oregon Indian Termination Act, tribes began working to restore federal recognition of tribal status and lands. While in office, Congressman AuCoin introduced and championed multiple bills for the Confederated Tribes of Siletz and the Confederate Tribes of Grand Ronde, supporting them in their fight to regain federal recognition.

The Confederated Tribes of Siletz is a confederation of over 25 tribes and bands from 20 million acres of land across what is now Washington, Oregon, and northern California.1 After the opening of the Oregon Trail and the beginning of the gold rush, a large influx of white settlers and miners created friction with local tribes over timber, hunting, and fishing resources. White settlers eventually escalated this conflict by killing several Natives, beginning a cycle of attacks and retaliations that expanded to include the US Army and became known as the Rogue River Wars (1855-1856). At the conclusion of the war, many of the tribes and bands in the region were forced onto the Coast Indian Reservation, now known as the Siletz Reservation. The reservation originally included over one million acres of land, but over the next decades the US made and broke treaties that reduced that land to 100,000 acres. The Dawes Act of 1887 privatized the reservation into individually owned allotments and returned the remainder to the government, further reducing the land owned by the tribe. In 1954, Congress passed the Western Oregon Indian Termination Act, which severed all ties between the US and the Confederated Tribes of Siletz. The law was nominally intended to give Native peoples the same rights and privileges as all American citizens, but in reality it terminated all of the protections, services, and land promised to them by the US government.

Beginning in the 1960s, several members of the Siletz tribe began working to restore the tribe’s federally recognized status. They gained the support of several Oregon congressmen, including Representatives Les AuCoin and Wendell Wyatt and Senators Mark Hatfield and Bob Packwood. Between 1974 and 1977, these congressmen introduced 4 different restoration bills, all of which were opposed by the Oregon Fish and Wildlife Commission. The fourth and final bill, which did not include hunting and fishing rights, was eventually passed in the House and Senate. President Jimmy Carter signed the bill into law on November 18th, 1977, making the Confederated Tribes of Siletz the second tribe in the US to have its federal recognition restored. In 1980, the Siletz Reservation Act returned about 3,500 acres of land to the tribe. 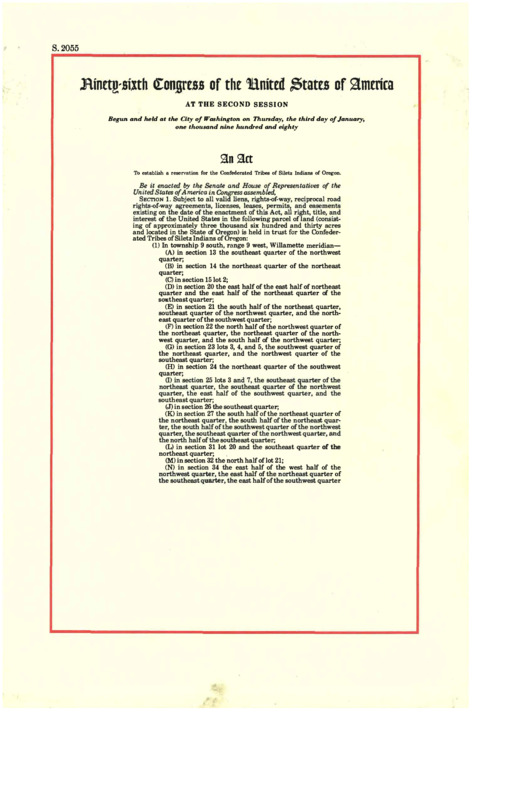 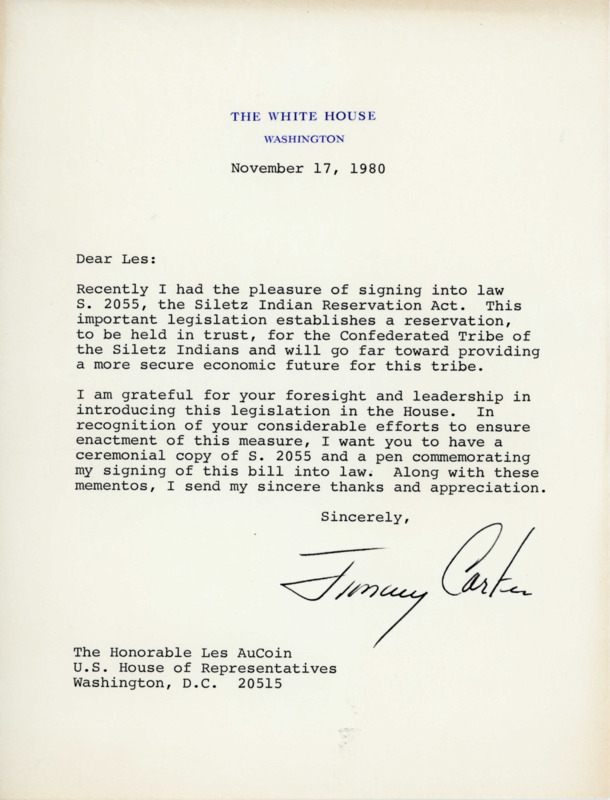 Letter from President Carter about the Siletz Indian Reservation Act

In the 1970s, the Confederated Tribes of Grand Ronde reestablished its tribal council and began working to restore their federally recognized status. The tribe, led in part by Kathryn Harrison and Mark Mercier, worked for years to raise funds, garner local support, and negotiate hunting and fishing rights. After years of work, the tribe came to Congressman AuCoin, who introduced the Grand Ronde Restoration Act in 1983. After the tribe’s federal status was reinstated, they continued to work towards reestablishing a reservation. In 1987, Representative AuCoin and Senator Mark Hatfield introduced two bills to create a reservation, one for 15,000 acres and one for 5,000 acres.

The idea of a reservation met significant local resistance, mainly from the local timber industry. To address these concerns, Representative Les AuCoin scheduled a local hearing to discuss the plan to reestablish a reservation. The hearing included a pro-reservation panel of tribal leaders and an anti-reservation panel of local lumber mills. Representative AuCoin also invited members of several federal agencies, including the Forest Service, the Bureau of Land Management, the Fish and Wildlife Service, and the Bureau of Indian Affairs, to answer legal questions about the process. The hearing helped clear the way for the reservation, and in September 1988, the Grand Ronde Reservation Act returned 9,811 acres of land to the tribe. 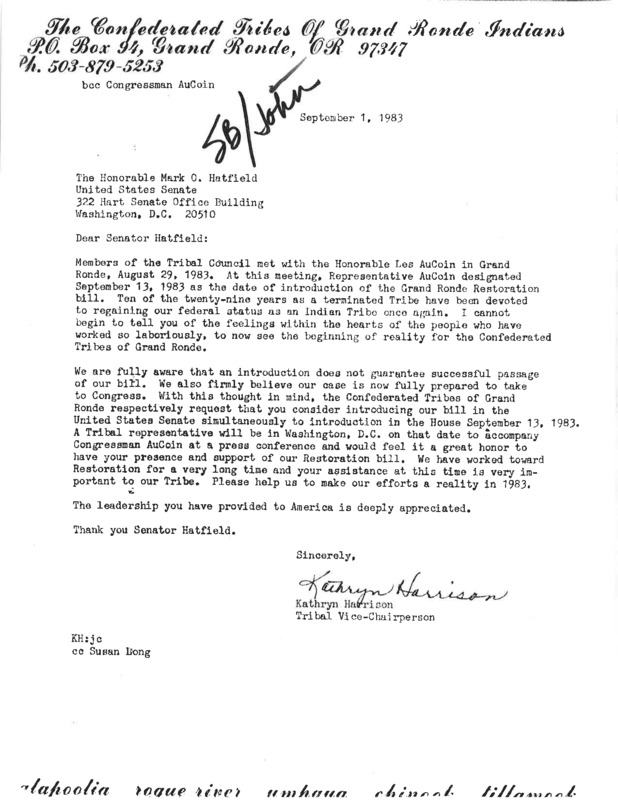 Letter from Kathryn Harrison, Vice-Chairperson of the Confederated Tribes of Grand Ronde 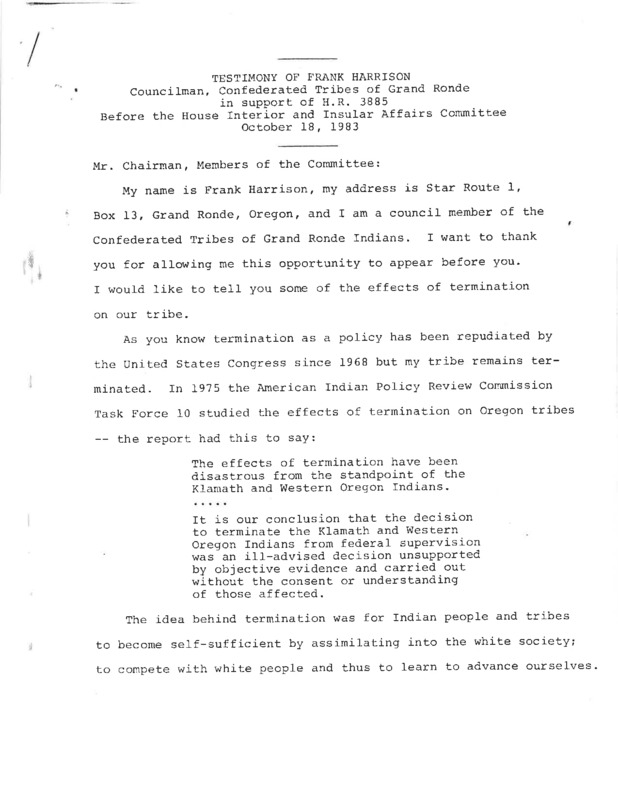 Testimony of Frank Harrison, Councilman of the Confederated Tribes of Grand Ronde 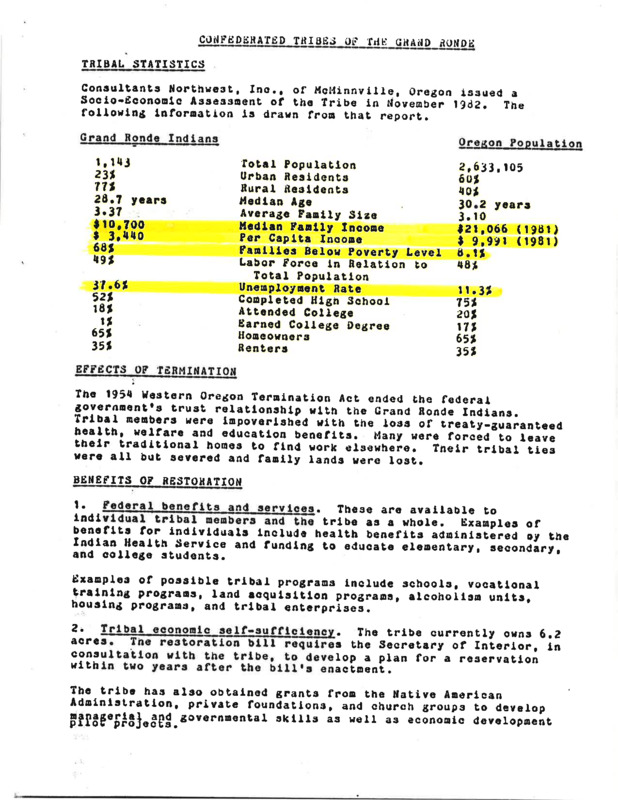 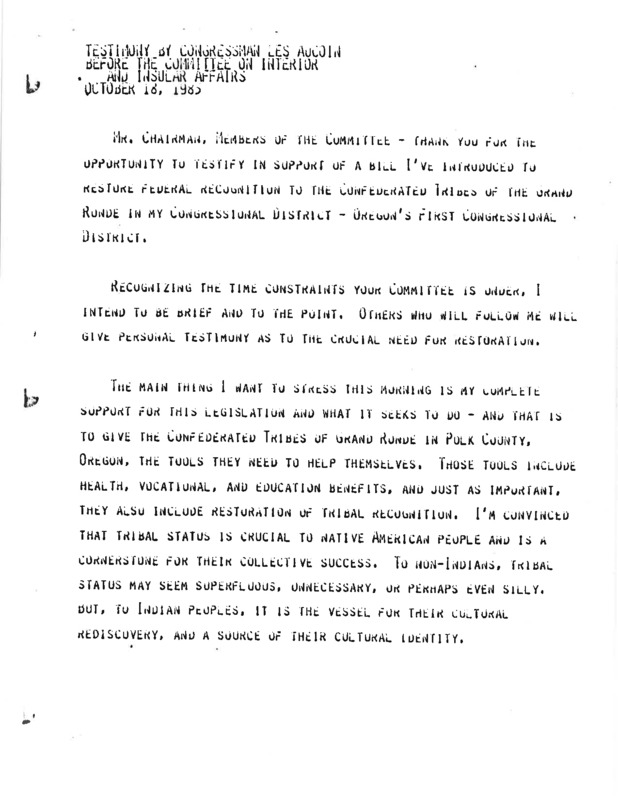 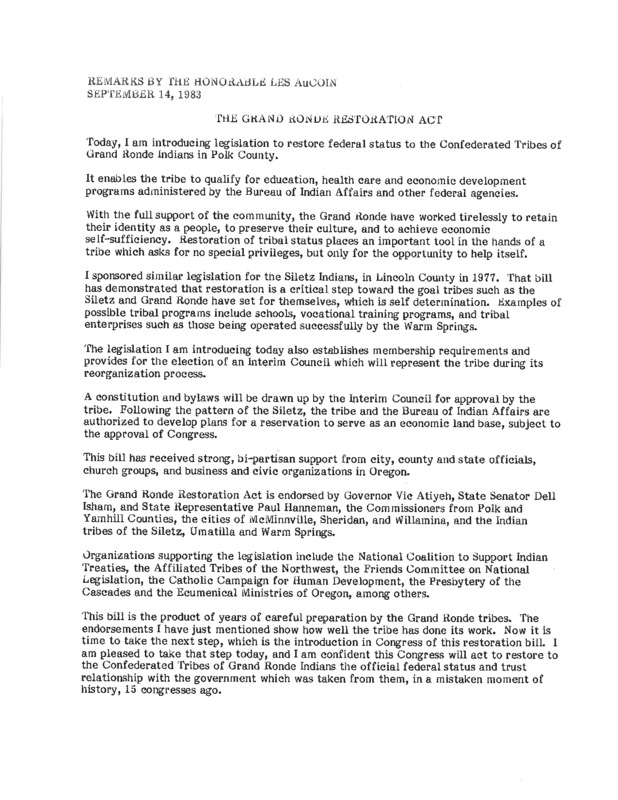 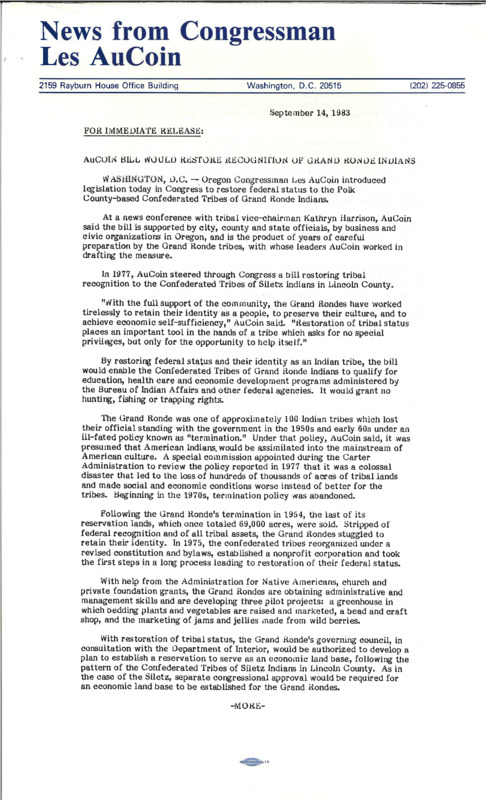 "AuCoin Bill Would Restore Recognition of the Grand Ronde Indians" 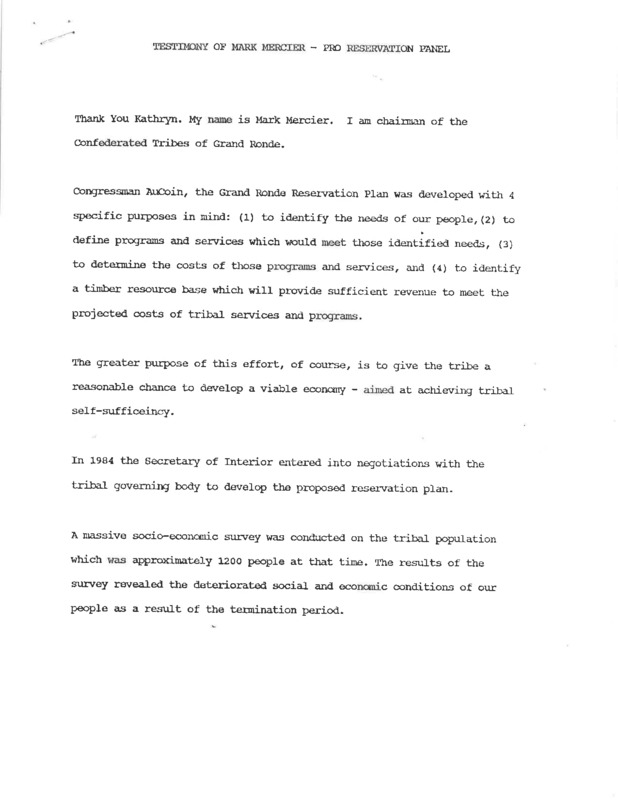 Testimony of Mark Mercier, Chairman of the Confederated Tribes of Grand Ronde 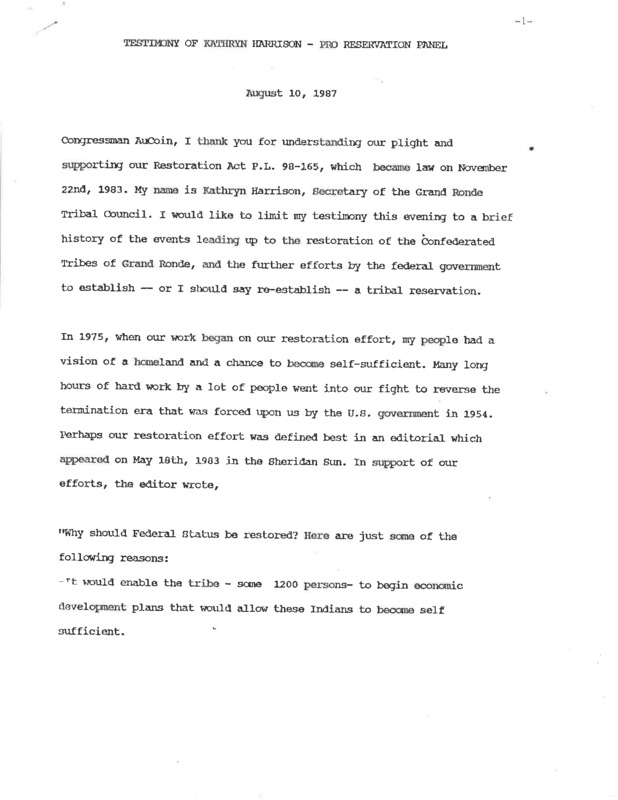 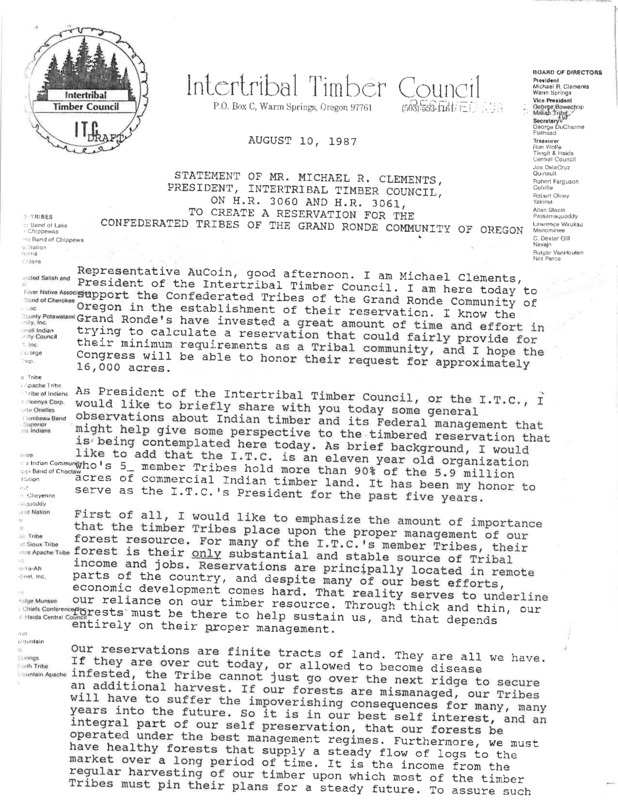 Statement of Michael Clements, President of the Intertribal Timber Council 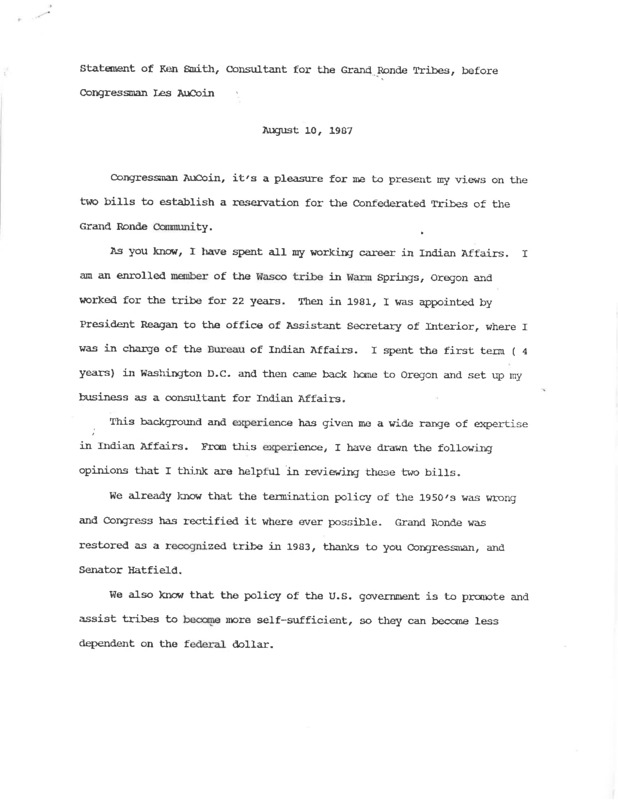 Testimony of Kevin Smith, Consultant for the Grand Ronde Tribes 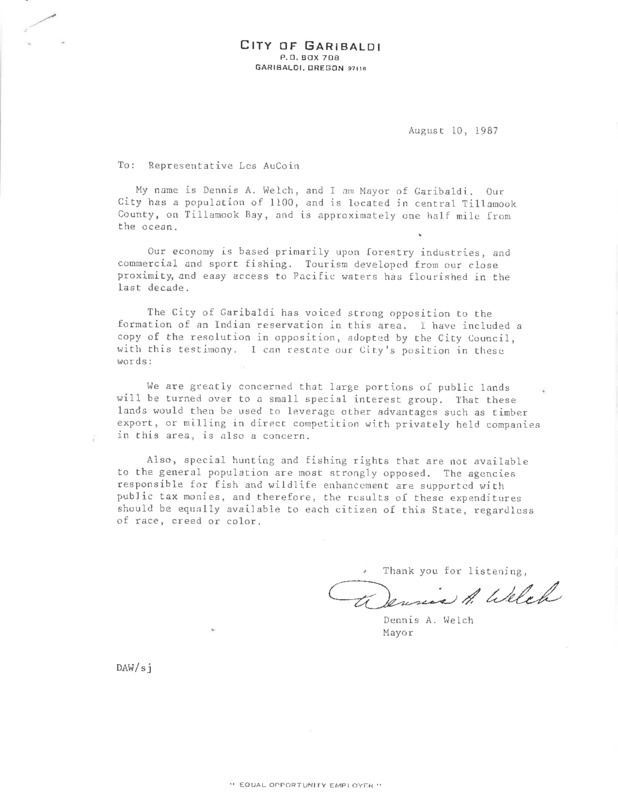 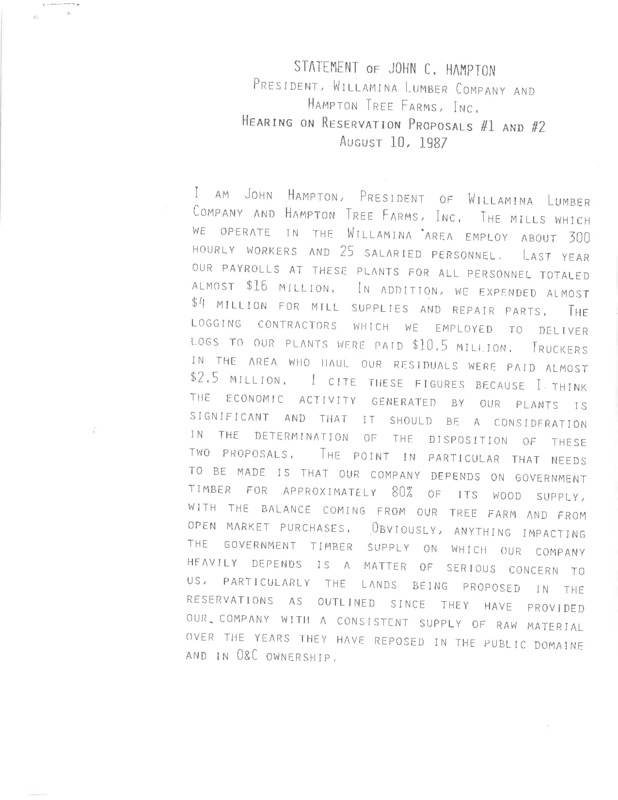 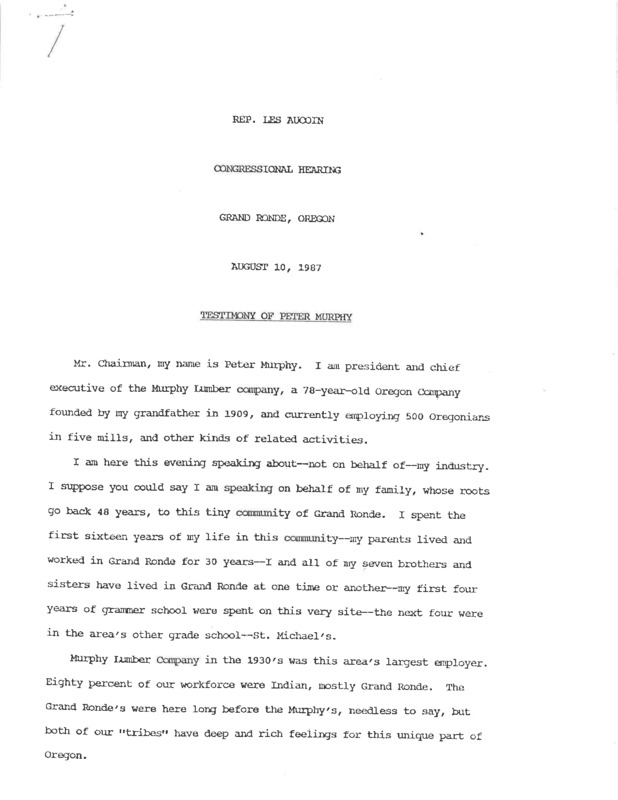 Testimony of Peter Murphy, President and Chief Executive of the Murphy Lumber Company 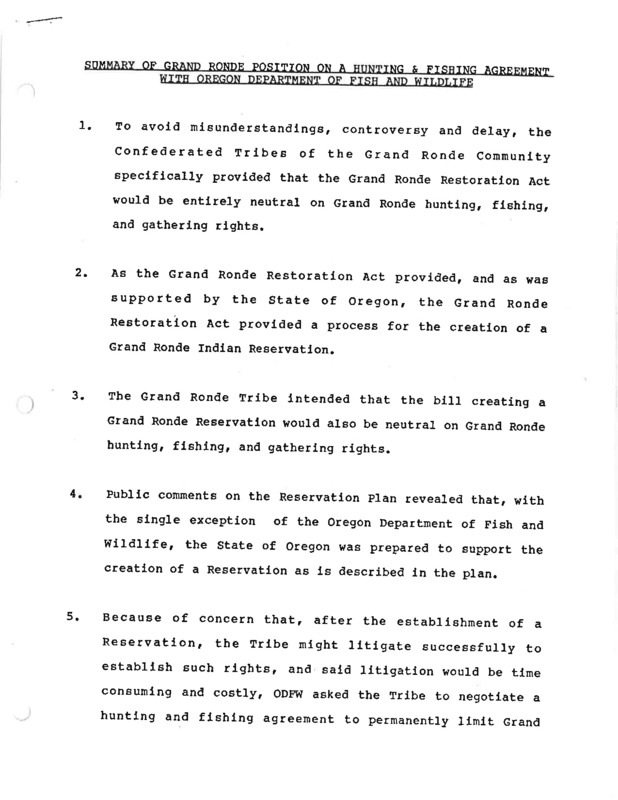 1: "Compiling a list of tribal groups that became incorporated into the Confederated Tribes of Siletz Indians as a tribe, or who had individual members who became incorporated into the Confederated Tribes is in itself a daunting task. The easiest way to accomplish it is to mention only the more general term for the language group or larger tribal affiliation, rather than getting down into the specifics of village based identity....Going by the preferred method stated above, the following is what is generally consider to be an inclusive list of “our tribes”: Clatsop, Chinook, Klickitat, Molala, Kalapuya, Tillamook, Alsea, Siuslaw/Lower Umpqua, Coos, Coquelle, Upper Umpqua, Tututni (including all the lower Rogue River Bands and those extending up the coast to Floras Creek and down to Whales Head), Chetco (including all of the villages from Whales Head to the Winchuck River), Tolowa, Takelma (including the Illinois Valley/mid-Rogue River and Cow Creek peoples), Galice/Applegate, and Shasta. Each of these tribes has a unique individual history, culture and legal relationship with the federal government, which was brought to be incorporated into the Confederated Tribes of Siletz Indians."

2: "These include tribal bands from the Kalapuya, Molalla, Chasta, Umpqua, Rogue River, Chinook, and Tillamook....The Tribe’s vision is to be a Tribal community known as a caring people, dedicated to the principles of honesty and integrity. The Tribe is committed to the responsible stewardship of human and natural resources while striving to be a community willing to act with courage in preserving tribal cultures and traditions for future generations."