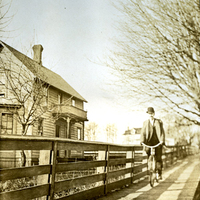 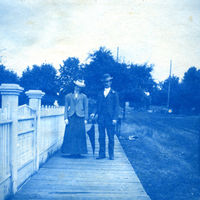 Edward W. Haines (E.W. Haines) was an Oregon state senator and banker from Forest Grove. He had his hands in many important ventures in town, including the founding of several businesses. Haines moved to Oregon from Iowa as a young boy in 1870. His family settled in Forest Grove after living in both Marion and Yamhill counties. Haines attended the Tualatin Academy and Pacific University.

After graduating, E.W. Haines bought a grain elevator, which he utilized to ship grain to Portland and San Francisco, California. Around this time, he also started a mercantile business in town with his business partner, John Bailey. Haines eventually sold both businesses and tried his hand in banking at the urging of his friends. He opened his first bank, the E.W. Haines Bank, in 1898. In 1914, along with John Templeton, Haines opened the First National Bank in Forest Grove. He would serve as president of the First National Bank for twenty years.

E.W. Haines helped build infrastructure that was integral to the city of Forest Grove in the early 1900s. Haines built a water power plant on Gales Creek meant to power the Haines Mill. However, the power plant provided electricity to not only the Haines Mill, but to the citizens of Forest Grove and the surrounding communities of Cornelius, Dilley, and Gaston as well. Haines also organized and served as president of the Forest Grove Transportation Company. He led the efforts to build a streetcar that connected the center of Forest Grove with the train station just south of town. The streetcar project was completed in 1906 and provided service for several years. The power for the streetcar was provided by Haines Electric Power Company, of which Haines was part owner.

Haines served as an Oregon State Senator beginning in 1898.