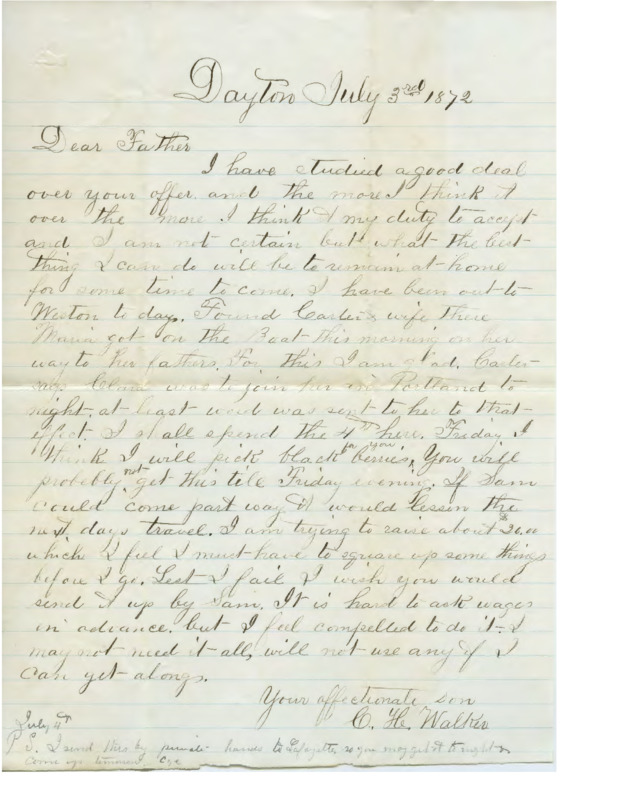 Letter to his father regarding money woes and his wife leaving for her father's house, July 1872

Cyrus Walker had hoped to become a successful businessman in Yamhill County, but by 1872 his debts were out of control and he was struggling to find a way forward. "I am dreadfully tired, but I find plentious grace to enable me to bear up under the heavy circumstances, though my spirit often cried out in agony & tears," he wrote his father. Having lost his home and livelihood, Cyrus accepted an offer from his father to go to work for him back in Forest Grove.  He appears to have taken a more active interest in fraternal organizations and the temperance movement around this time, perhaps as a refuge from his personal woes. He would sustain his passion for these causes over the course of his lifetime.

Surely under great stress from their financial situation, his wife left him in July of 1872. She evidently took their daughter, Lucy Adella, with her as she travelled back to her father's house. Divorce was very rare and scandalous, but she proceeded to try and get one anyway. In a letter dated June 30, 1873, Cyrus reported to his very religious father that a man named George was boasting of having a relationship with her, and that she was making moves towards the divorce. She gave him a farewell poem

Meanwhile, Cyrus himself had apparently already started looking for another wife. While his estranged first wife was living separately, he wrote poems to two girls enrolled at Tualatin Academy in Forest Grove: Clara Junkin and Mary Creswell. They appear to have rebuffed him, since he kept the poems -- but his fascination with Clara might have continued, as he kept another poem for her, dated two years later. 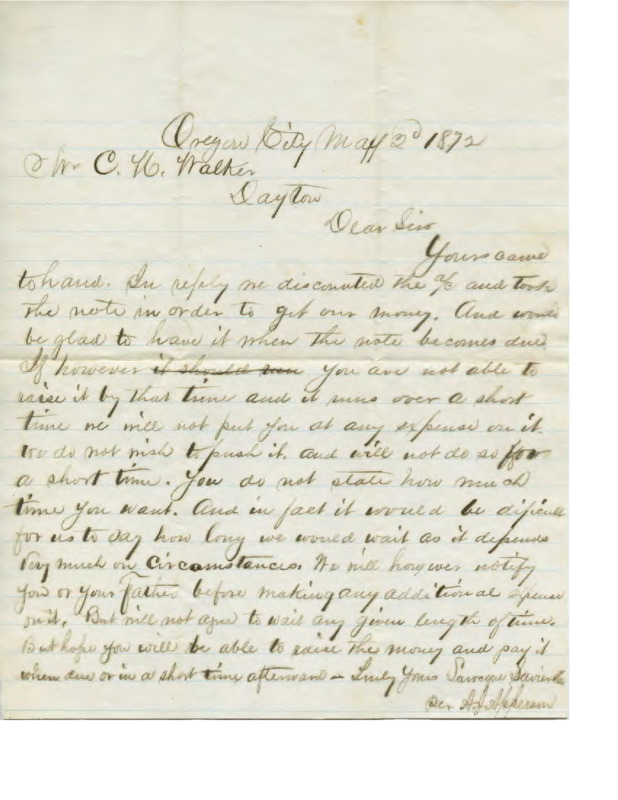 Letter from A. J. Apperson trying to collect a debt, May 1872 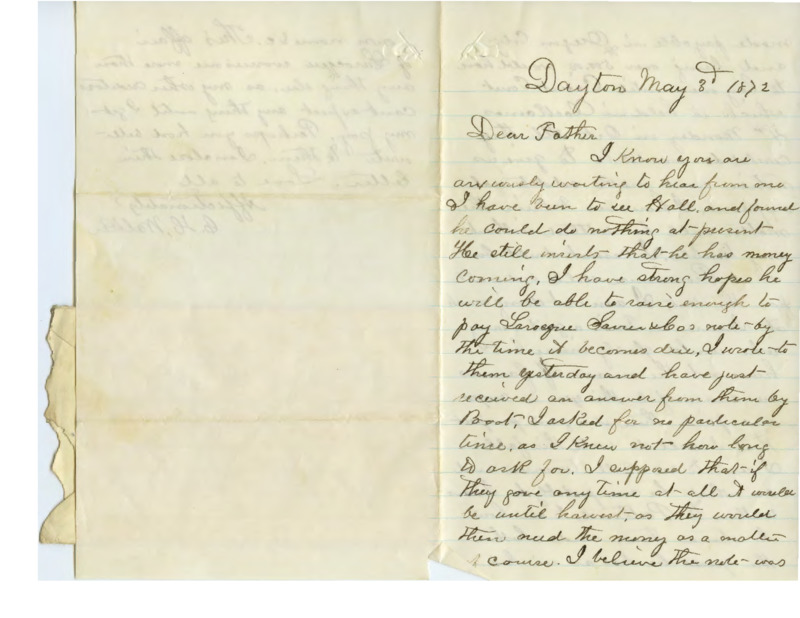 Letter from Cyrus Walker to his father regarding loans and other money matters, May 1872 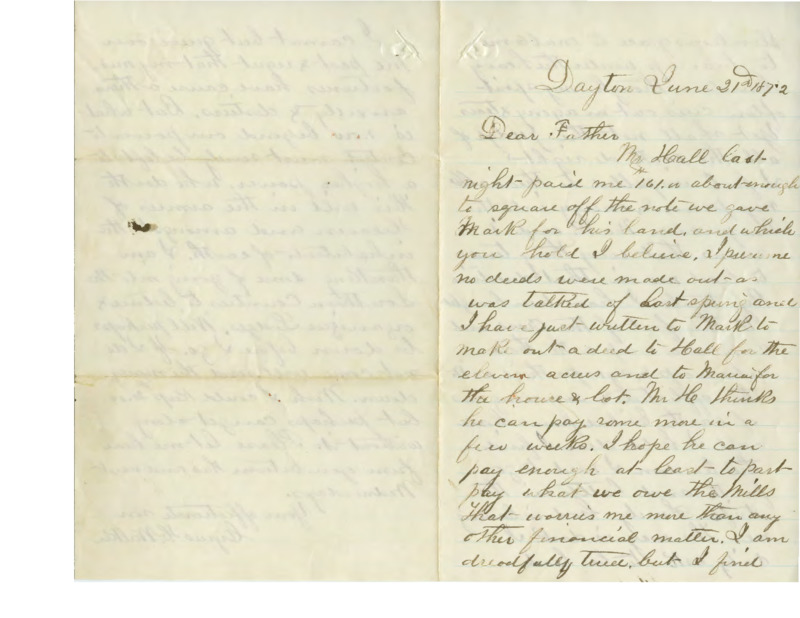 Letter from Cyrus Walker to his father regarding money woes, June 1872

Letter to his father regarding money woes and his wife leaving for her father's house, July 1872 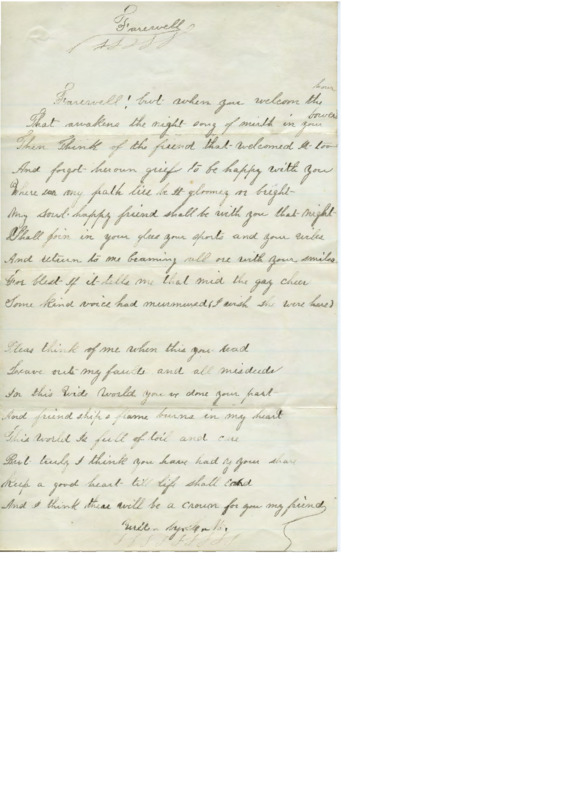 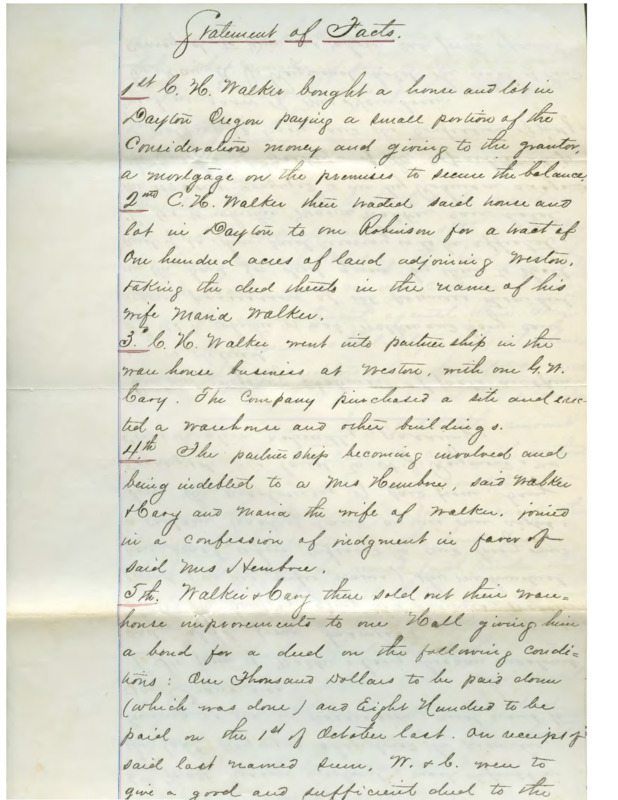 Legal opinion on their debts, Nov 1872 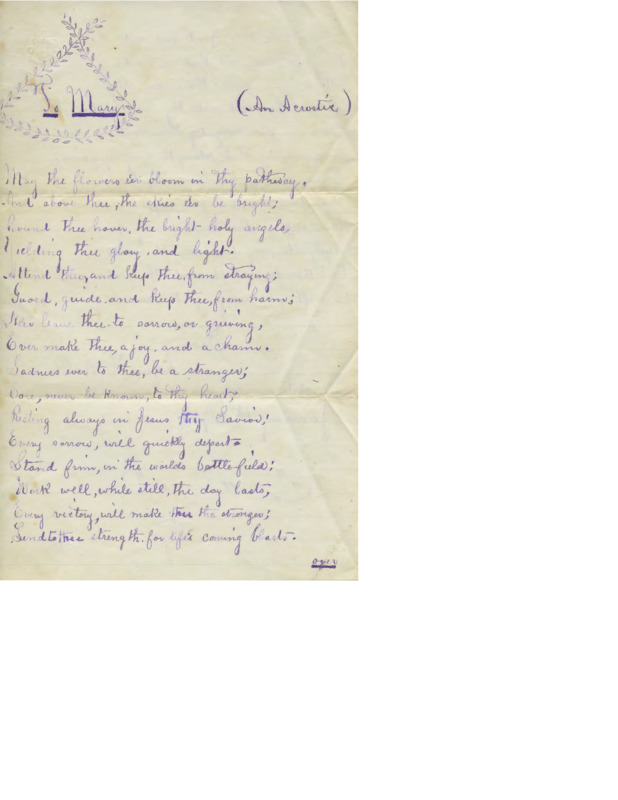 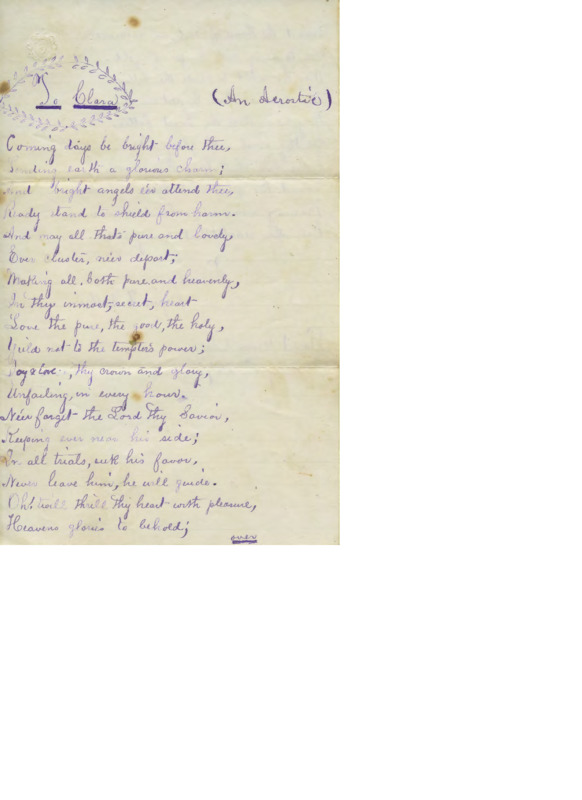 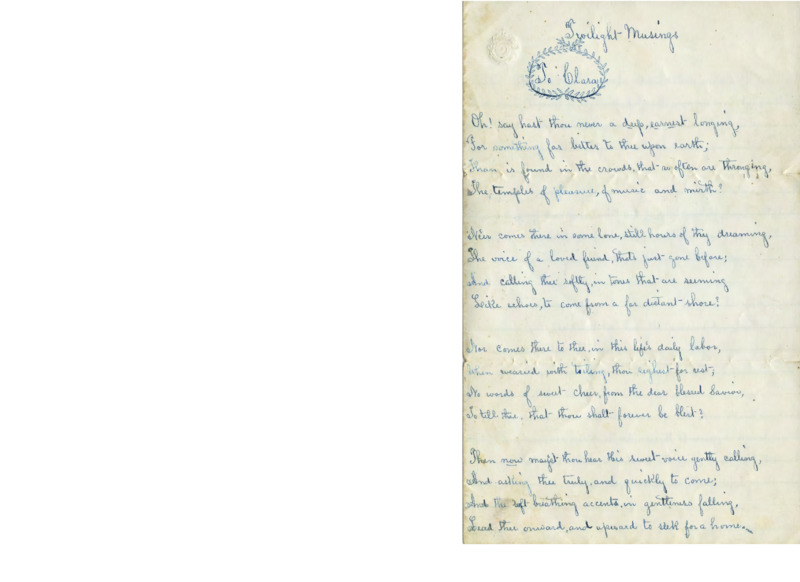 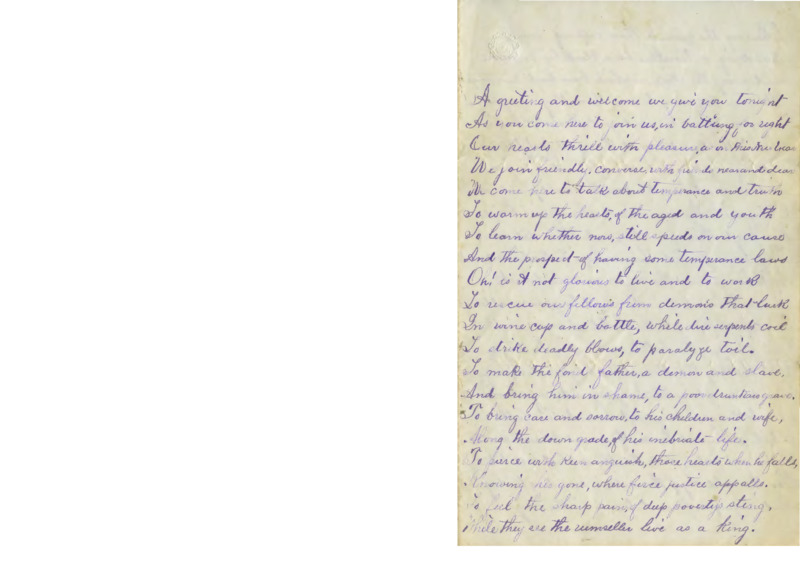 Poem in praise of temperance, Jan 1873 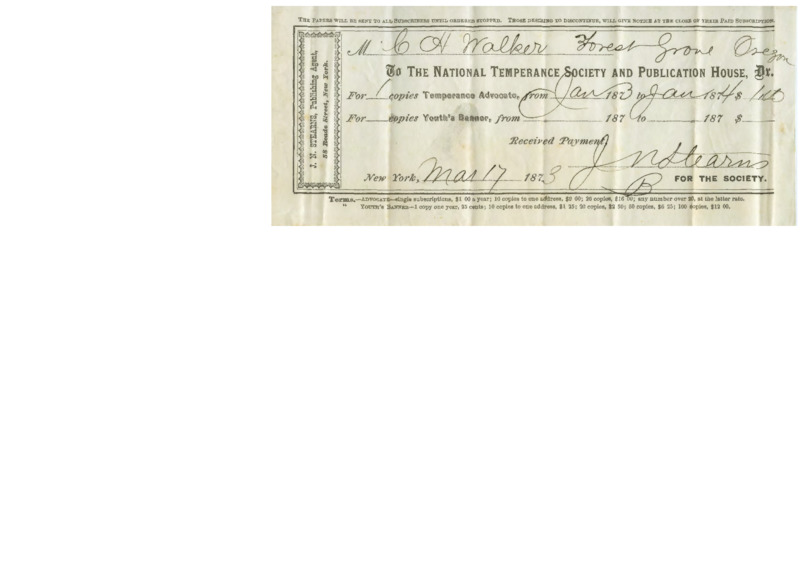 Receipt to Cyrus Walker for an annual subscription, Mar 1873 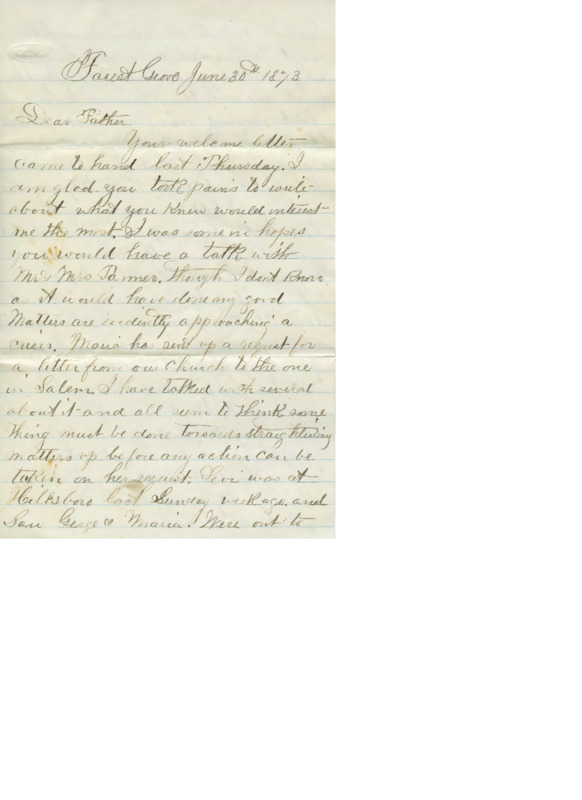 Letter to his father on his impending divorce and his wife's apparent infidelity, June 1873 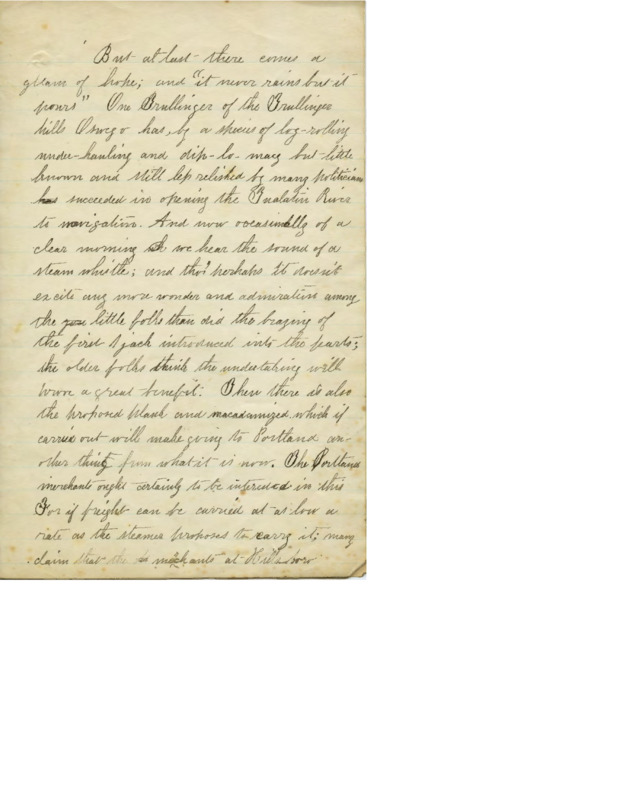 Note by on development of the Tualatin Plains including a macadamized road from Hillsboro to Portland,
1873?