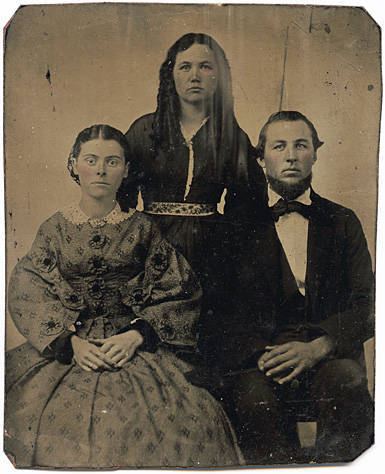 Cyrus Walker with his first wife (seated) and her sister, 1860s

Cyrus Walker, born December 7, 1838, was the oldest son of the early Oregon Territory missionaries Elkanah and Mary Richardson Walker. He grew up at the Spokane Mission at Tshimakain in the 1830s-40s, then attended Tualatin Academy in Forest Grove. After joining the U.S. Army during the Civil War and then attempting to make a living as a farmer, he worked for many years at Warm Springs Indian Agency. In his last years, he became deeply involved in memoralizing Oregon's early pioneer history.

These letters, documents and clippings shed light on his experiences, with rich descriptions of life at Warm Springs in the 1880s-1890s. Nearly all the material presented here was donated to Pacific University by Betty Thorn, a descendant of the Walkers.