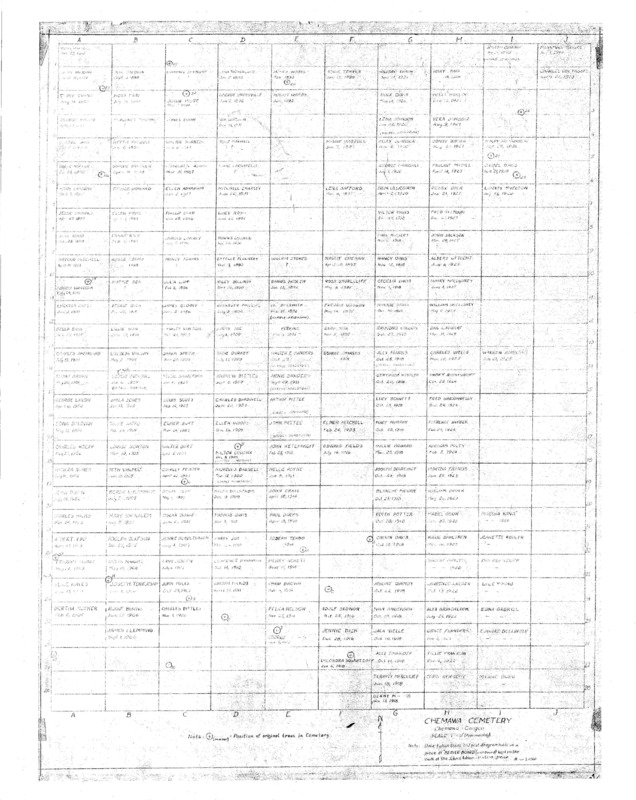 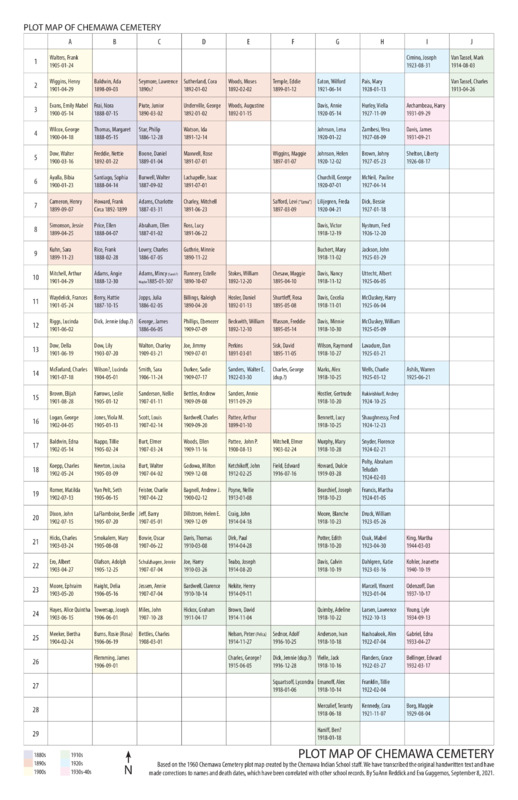 Many students who died at Chemawa were buried in a cemetery on the school grounds. School staff created a Map of the Chemawa Cemetery in 1960. (This typed, corrected version may be easier to read.)

Graves documented in the 1960 map include:

Roughly a dozen burials of people with connections to Chemawa have been made in the cemetery after the map was drawn, mostly dating after 1986.

To create this map, school staff transcribed names and dates from an earlier map, which was on an "old plot diagram made on a piece of [...] wall board kept in the vault of the School Administration Office," according to a note on its legend.

The 1960 map was made at about the time that the school renovated the cemetery. One account by the Willamette Valley Genealogical Society describes what they believed happened: "Over the more than a century of its existence, the cemetery has seen repeated attempts to clear it of brush and poison oak, leading to a 1960 draconian measure: leveling the area of markers and vegetation in order to ease further maintenance of the graveyard. At this time, cement bars affixed with heavy gauge copper plates were placed at each grave listed on a master plat plan created in 1940 by W. B. Showalter.* Students at Chemawa completed the project" (Willamette Valley Genealogical Society, Beaver Briefs, Winter 1993).

School staff also remembered this event. Around 2002, Charles Holmes (who taught industrial arts at Chemawa in the 1960s-70s) explained to SuAnn Reddick (co-author of this site), that the “cleanup” left few of the original grave markers intact. Some were marble, but most of them were likely made of wood and long deteriorated or gone. Based on the 1940 Showalter master map, Holmes and another employee laid out a grid on the ground with stakes and string.  His shop class made the current plates with names and death dates, he said.

Locating actual graves at the Chemawa Cemetery using this map presents some difficulties. The cemetery is located on the southwest side of the Chemawa Indian School campus (see location on Google Maps). Investigations using ground-penetrating radar suggest that many of the current graves markers may not accurately match up with grave sites (See Marsha Small's work as described in "Tribe aids Chemawa Cemetery project," Smoke Signals, Aug. 15, 2013, p. 7). While more work is necessary on the cemetery in order to untangle its history, this map provides some starting points for correlating archival records with physical spaces.

*We assume that the 1940 "Showalter" map was identical to the "School Administration Office" map mentioned on the 1960 map legend. No copies of the original Showalter map have yet been located.