The Detailed Spreadsheet provides additional documentation about deaths at the Chemawa and Forest Grove Indian Schools. 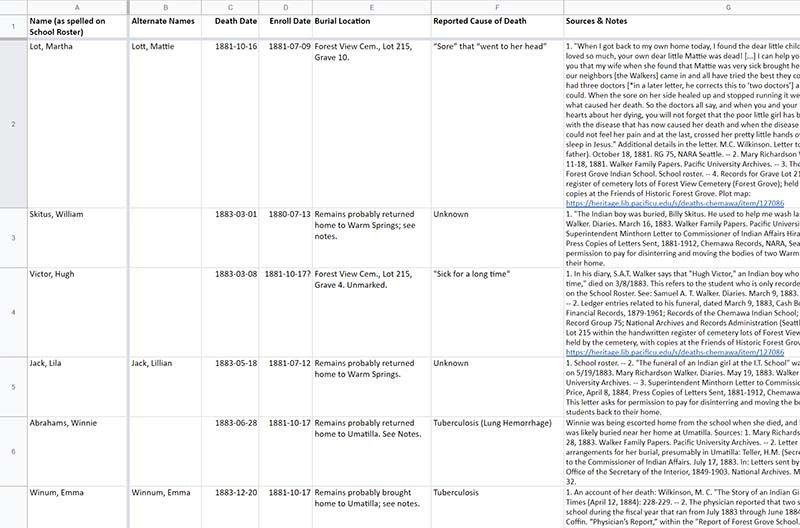 What is included on the Spreadsheet?

The spreadsheet provides information about:

It does not include:

To find out more about students documented on this site:

Key to the Spreadsheet

Names - In general, student names were derived from the original school rosters that were created and maintained by school administrators. The originals of these rosters are kept by the National Archives. A digitized copy of the roster is available on the FamilySearch.org site - you will need to sign into their site in order to view it. It is important to note that because the names on these rosters were created by school administrators, they document the English names of the students, which were often different than the Native names that many students used at home. Names taken from the rosters may include misspellings or inaccuracies. When known, additional forms of the students' names are included in the "Alternate Names" column. Corrections or notes are very welcome: please contact archives@pacificu.edu

Alternate Names - This column contains other known forms of the students' names; see "Names" above for more context.

Death Date - The recorded date of death of the student. Dates are provided in YYYY-MM-DD order in order to allow sorting by date. These dates are taken from a variety of sources, including: original school rosters and other archival records of the school held by the National Archives; contemporary newspaper articles; cemetery records; and other sources. See the "Sources" column on the detailed spreadsheet for specific citations.

Enroll Date - The date when the student first enrolled at Chemawa Indian School or Forest Grove Indian School, according to the original school rosters held by the National Archives.

Burial Location - If known, the cemetery and plot location of the student's grave. Corrections, additions and comments are very welcome: archives@pacificu.edu

Grave Marker - This column indicates whether or not there is a known grave marker for the student. We define "marker" as a gravestone or plate that physically marks a grave.* In general, we have left this section blank for students whose remains were sent home.

*Note regarding Chemawa Grave Markers: Grave markers in the Chemawa Cemetery may not always match with the plots where students were actually buried. Around 1960, the school cleaned up the cemetery and replaced many old markers (which may have been missing, disintegrating, or have come detached from their original locations) with new engraved plates. The new plates were laid down in locations that may not match the actual burials in all cases. The Chemawa Cemetery Map page includes more information about the locations of these graves.

Reported Cause of Death - This column provides information about what the students reportedly died from. Most often, we found this information within the school's "Sanitary" records or other administrative records such as rosters. When possible, we have corrected or supplemented the school's reported information about causes of death with corroborations from other sources, such as contemporary diary entries, newspaper articles, and so on.

Sources and Notes - This column contains citations for the sources we consulted that document the student's death and/or burial. We have also entered notes in this column when appropriate. Because the research into student deaths has encompassed many years of work, for some students, we are still correcting or filling in citations. For more information see the page on Sourcesor contact archives@pacificu.edu for assistance.

Tribe - This generally contains the student's tribe as reported in school records,  although we have corrected the tribal name in some cases when more specific information has been found. Please note that the school's interpretation of a student's tribe may not always match with how a student would have self-identified.  Several issues with the school records include:

Reservation or Village - This contains information about the student's home reservation and/or tribal village, as reported in school records. In some cases we have corrected this when more specific information has been found. Like "Tribe" above, the Reservation/Village information may not always match with how students would have described themselves.

No. on School Roster - This contains that school administration's identifying number for each student, which was supposed to be unique for each student. Some National Archives records are filed in order of this student number. A scanned copy of the roster is here (a free account is required for access).